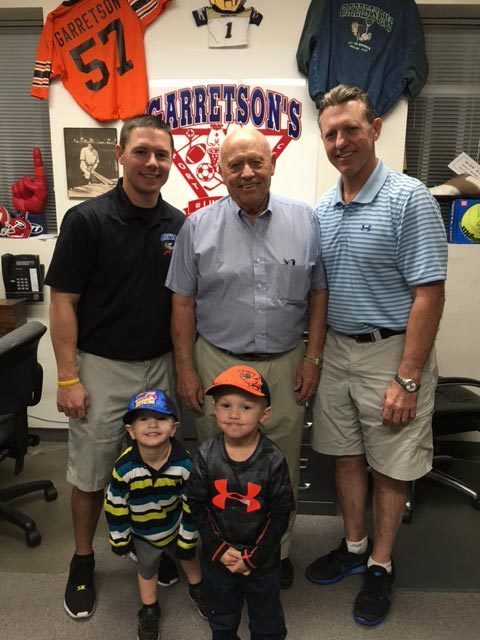 The story of Garretson’s Sports began, simply enough, with a phone call from a local sporting goods store to Zeke Garretson – who at the time was a high school coach – asking him if he wanted to buy a business called Bill’s Sporting Goods, in nearby Sterling, CO. Over the mild objections of his father, who nonetheless loaned him $5000 to start the business, Zeke began a five-decade, three generation business that is still going strong 52 years later in Greeley, CO.

Zeke, now 81 years old, has been joined in the business by his son, Todd (56), who started working at the store in the ribbon and trophy department at age 12 and has worked in every area for the last 45 years, and Zeke’s grandson and Todd’s son, Tyler (32). In addition to the three men, Todd’s wife, Cheri, has been involved since 1983, and Tyler’s wife, Morgan, remains active in the business. Of course, Zeke’s wife, Maurine, was instrumental in the start-up back in 1965.

At that time, Zeke and Maurine were the only employees in a small building that consisted of a small back room and a tiny bathroom. As was typical of many small team dealers in those early days, Maurine ran the store while Zeke was on the road calling on local high schools. The store inventory included Converse Chuck Taylors, socks, jocks, T-shirts bats, gloves balls and a few guns in a small display case.

“They didn’t have a cash register, they had a metal cash box, and they had to fit shoes on the floor,” recalls Todd. “I believe they also sold a bottled cleaner called Swipe to supplement sales.” As the business grew Garretson’s moved next door and expanded its inventory to golf, tennis and more guns, along with adding some decorating capabilities.

In 1970, Garretson’s moved again to a two-story, 15,000-squarefoot building and expanded to include cameras and film processing and trophies. The inventory included all sports, plus a warehouse for storage and team sports. Garretson’s assured its dominant local position by buying out the only other sporting goods store in town and hiring the store manager and several of its employees.

Then in 1974, with more than 25 employees, Garretson’s moved again to a large car dealership building a few blocks away and redid it in brick with a big brass fireplace in front. With this growth came expansion into hunting, fishing, screenprinting, engraving and all retail and team sports. Later, a smaller second store was opened in Fort Morgan, CO.

Still the moves continued for a business looking for continued growth. In 1983, it moved the Sterling store to Greeley, CO, and in 1986 it relocated to a three-story older building and remodeled again, all the time maintaining a similar layout and inventory and operating as a full-line sporting goods store and team dealer. In 1999, Garretson’s again refurbished a 25,000-square-foot car dealership building and expanded the business from downtown to the growing west side of town.

Today Garretson’s, a strong member of Nation’s Best Sports buying group, has 22 employees (six of which have been with it for more than 25 years) and sells every team sport, as well as hunting, fishing, casual clothing, golf and tennis, along with in-house screenprinting, embroidery, chenille and laser engraving. It even has an archery lane and batting cage. Four roadmen call on schools and businesses.

“We have had all the main competitors come and go over the years – Dave Cook, Sports Authority, Dick’s, Scheels – and have managed to thrive,” boasts Todd, not without justification. And it does it even with closing on Sundays. “My grandpa always said, ‘if you can’t make in six days, you can’t make it in seven.’ Our employees appreciate that.”

Through it all, Garretson’s has maintained a distinctly family feel, one of the reasons Todd gives for its ability to survive for three generations. “We celebrate every birthday with homemade cakes and singing,” he says. “We play a lot of jokes on each other.”

It doesn’t hurt that Zeke, Tyler and Todd are all very competitive. “We all think we are the best athlete as well as the best salesman,” Todd says. “We might argue like crazy with each other, even might be mad at each other, but at six o’clock we can all go out to eat and be friends.”

He also attributes the company’s longevity to the Garretson family’s faith in God and Jesus Christ. “We know he is the reason we have survived and if we are to continue, it’s up to Him,” Todd says. But he does not sugarcoat the challenges inherent in a family operating a business for three generations. “The pro is family — the con is family,” he says, pointing out that while they all certainly get along well enough, sometimes there is a strain.

“You can be flexible and leave for family events and games, but you also have to be at the store a lot,” he points out. “We all usually work six days a week and we don’t take lunches. But if something comes up, or you have a game, you can leave. That’s the trade off. You also know that we will always do what is best for the company because it has our name on the building.”

He acknowledges that the family members do talk business all the time. “Some times we talk too much, but everything we do centers around the business,” he adds. “Family gatherings, games, you name it — something is always mentioned that involves the business.” But he, Zeke and Tyler would have it no other way. “The best thing is the pride that comes from hard work and hoping you have someone to continue in the business,” Todd says. “It doesn’t happen very often to have a third-generation business that makes it past 50 years. We are a close family and enjoy working together.”

Todd feels that most businesses don’t make it to third generation because the family members lose interest, or it’s just not their thing. “We all happen to like sports, selling and competition and we can get along with each other. We don’t get our feelings hurt. That is huge when working together.”

Is there a fourth generation waiting in the wings? You can never tell, Todd says. “In a perfect world, Tyler’s son or sons would take over the business,” he says. “We want to keep going as long as it is God’s will for us. If we had to sell, we all feel we could make it in another business since we are confident in our abilities, but it would be hard to change what we have done for most or all of our adult lives. This business is in our blood.”